By Randall S. May

During the heart of the great depression, Scott & Nellie Romesburg of Uniontown, Pennsylvania moved about 35 miles with their four children – Garnet, Mildred, Betty, and Scott Jr. – to a small farm owned by their family in the village of Kingwood. After graduating from Somerset High School in 1935, eldest daughter Garnet traveled to Johnstown to begin training to become a Registered Nurse through the Conemaugh Valley Memorial Hospital Nursing School. For young southwest Pennsylvania women attached to their families, this institution offered an affordable opportunity to develop a career while staying close to home. Six years later, Betty had developed similar ambitions and followed her big sister to Johnstown. Although Garnet and Betty would take very different paths going forward, the experiences at the nursing school and the nursing profession would influence them for the rest of their long lives.

After finishing her training and becoming an RN, Garnet worked in the operating room at Somerset Hospital. Garnet always displayed an outgoing, gregarious personality and an infectious laugh. Attracted to serving as many patients as possible, it was natural when she began working for young Dr Marlin Cargill who covered a wide range of medical problems for Somerset area residents. Most notably, she traveled with Dr. Cargill to numerous residences to deliver babies at home. 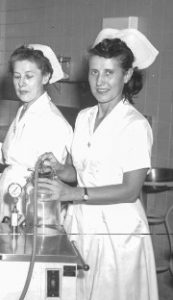 As the public face of Dr. Cargill’s office, Garnet gradually became an institution in Somerset County. Viruses, bruises and scrapes, fishhooks in eyelids, heart conditions and all these new babies were all within her purview. It eventually became impossible to walk with her down the street in Somerset without being hailed and chatted up by every passing pedestrian, and sometimes even by drivers of passing cars. More than once, she would be approached with a comment such as “You’re Garnet! You and Dr. Cargill delivered me at home!”

In 1948, Garnet married Kenneth Glenn, a handsome State Policeman whose brief service as B- 17 gunner was cut short when his plane was shot down over Germany and he endured life as a POW for nearly two years. By the early 1950s Garnet and Kenny had built a beautiful house overlooking Somerset, and they savored life together in Somerset until Kenny passed away in 2007.

Garnet worked for Dr. Cargill until his death in 1971, and barely missing a beat began serving another young Somerset physician, Dr. Pete Musser, as his office nurse. Garnet’s profile in Somerset continued to expand, and she was still working full time and going strong until she retired in her late 70s. Having served patients for over 50 years for two local physicians, she was known to practically everyone in and around Somerset.

Betty entered nursing school in 1941 knowing that the outgoing Garnet’s act would be a hard one to follow. Betty’s personality was more reserved, and she became known for her studious and serious nature.

Upon graduating from Nursing School in 1944 and passing her RN boards, Betty worked briefly at Somerset Hospital but could not forget about the thousands of American servicemen being wounded or falling ill each month. In early 1945, she joined the U.S. Army Nurse Corps and after military training was commissioned a 2nd Lieutenant with specialty as an operating room nurse. During WWII, no time was wasted in moving trained nurses to where they were most needed. She was assigned to a hospital ship headed for Alaska and the Pacific theater, but while passing through the Panama Canal, the voyage was interrupted by an urgent need for nurses in the Panama Canal Zone. Betty was selected, disembarked on a few hours’ notice, and spent the rest of the war and on until 1946 serving as an operating room nurse at an Army general hospital in the Panama Canal Zone.

At the conclusion of World War II, Betty’s skills and experience gained as a military surgical nurse were in great demand, and she accepted an offer to work in the operating room of the University of Michigan Medical School in Ann Arbor. Within a year, Betty also had a dashing suitor just returned from the war, B-29 pilot Captain Harry May of Chicago, who she had known from his yearly visits to his grandfather’s farm in the Rockwood Area. After they were married, Betty was quickly able to find a similar position in the operating room of the University of Chicago hospital.

It was less than two years later when I entered the picture as a newborn and following the norms of the day Betty’s nursing career was put on hold as she concentrated on bringing up her son and moved multiple times to support Harry’s Air Force career.

Ties to the Nursing School and Community

Betty and Garnet remained close to each other and to their parents and siblings Mildred and Scott Jr. throughout their lives. Although Garnet and Betty had quite different personalities and chose very different paths, their bonds to Somerset County and to the Nursing School remained very strong. It was easier for Garnet to stay connected as a local resident and practicing office nurse. Although Betty never worked again as a nurse following my birth in 1948, she kept her nursing license current until into her 90s, regularly studied nursing journals, and frequently surprised our family physician with her knowledge of medical conditions and treatments.

Both Betty and Garnet attended reunions for many years and maintained friendships with Conemaugh Valley classmates. One of Betty’s classmates was instrumental in Betty and Harry’s decision to retire on the central coast of California, and as near-neighbors they became even closer over time. Despite living in California and other distant places, Betty and Harry always regarded Somerset Country as “home”, and today they lie at rest in Kingwood IOOF Cemetery, not far from Garnet and Kenny.

Throughout these sisters’ extraordinarily long lives [Garnet lived to almost 100, Betty to nearly 97, and their middle sister Mildred to past 98] they continued to value their education at Conemaugh Valley Memorial Nursing School. Small local institutions provide essential opportunities for young people who may have limited resources or who wish to stay connected with their communities and families. While specialized training can be acquired later through topical courses or working experience, there is no substitute for solid grounding in science and practice that opens the door to a career in health care. This solid foundation supports to a wide range of interests, from Garnet’s work as an office nurse to Betty’s specialized surgical support.

Because of the value that Betty and Garnet had placed on the nursing school as well as their communities in Western Pennsylvania, we have honored their memories by establishing scholarships that will help other area young men and women achieve similar dreams. Starting with the 2021-2 academic year, the tuition for two outstanding final year nursing students is being funded by the Garnet Romesburg Glenn Nursing Scholarship and by the Betty Romesburg May Nursing Scholarship.

Acknlowledgements: I am grateful for the support, firsthand knowledge and photographs supplied by my cousin, Mildred’s daughter Sondra Jean Herring Bisignani of Pittsburgh. Debbie Costlow, of Johnstown’s 1889 Foundation, worked with the nursing school to transform good intentions into active scholarships for two deserving students.